DEALS EMAILED STRAIGHT TO YOUR INBOX!

Does your Colorado AR5 not shift quite as crisp as it use to? Are you looking to shorten the throw of your factory Colorado AR5 shifter? Did you just purchased a Colorado AR5, and when you received it, you realized that the shifter was not included? Whatever the case may be, we have the solution for you! The FABbot Colorado AR5 billet short throw shifter is made from 6061-T6, firms up the shift feel, includes optional adjustable shifter stops, and shortens the throw by up to 60%! This shifter also includes an offset handle option to move the shifter knob forward or back 1.7".

Requires a shift knob with a m12x1.75 thread pitch.

The shifter definitely works as advertised. The throw distance has indeed been significantly reduced. My truck now almost shifts like a car. The handling and feel of the vehicle has definitely changed for the better. These are all positives. Now for the negatives.

The negatives: It was not a direct bolt on to my AR5 box. First off I had to saw off two brackets that were preventing the square shifter base from mating directly to the surface of my AR5. The brackets already come installed on the AR5 box as well, so there was no need to add extra brackets on to this short shifter. This was the first challenge.

The second challenge was that upon installation, the shifter was too low and forward placed for my liking.

Infact, If I was to drive the car I would have had to not only lower my seat but also moved it forward, unrealistically close to the pedals and steering wheel. This was therefore not feasible for me. So I had to improvise.

I had to get myself extra metal brackets and create a quasi-remote shifter, so as to have the shifter suit the driver's position in my truck.

One another thing I noticed is that the shifter cup ball, springs and other rubbing surfaces in the shifter assembly base are not lubricated. So they'd make a lot of squeaky and metallic rattle noised when cruising as a result of vibration from the drive train. Again for this I had to inject grease in the assembly.

Additionally, there needs to be a smaller rubber boot installed at the base of the shifter stick, so as to prevent dust and contaminants from finding their way in their.

All in all still a good product and has changed the car's handling. Faster take-offs, better downshifting and revmatching, better acceleration. Car no longer loses revs or momentun between gear transfers.

While it's good. Beware that it requires work to install. You need to be handy with tools and have some patience along with a creative mindset. Well that's how it was for me. I had to keep installing, then test drive multiple times until I got it to work per my needs.

Unfortunately I got so carried our way in the install process, that I forgot to attach pictures. My apologies for that, to anyone reading this.

Attached is a picture of my truck though. It's a compact truck compared to the ones in America. Mine is a Holden Colorado RC, 3.6l V6. The body shape is similar to the older GMC canyons. I'm in Australia by the way.

Nothing but quality in every box from fabbot 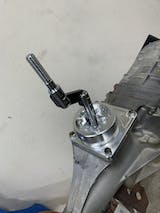 Free delivery inside of the continental US